A new high capacity menstrual cup has entered the arena- the Venus Cup. Boasting capacities higher than most cups in each size, a rounder base, and a very attractive price point (around $15-$20 per cup or $30 for a two-pack), the Venus has been the most requested review as of late.

I’ve taken it for a two-cycle run and gave their small and large a trial. The video embedded above will give you the long form Venus Cup review and my experience with the cup, but for those who hate videos keep reading.

The Venus Cup is made from medical grade silicone and comes in a Small or Large size. The menstrual cup market is exploding, and many brands have brought their A-Game when it comes to the packaging and branding of their cups. Venus is not one of those brands. In fact, we have had multiple community members assume Venus is another “re-brand” generic cup. But while the packaging isn’t winning me over, their cup design itself does offer something new with it’s higher capacity offering. You can compare Venus to other brands of cups using our Menstrual Cup Comparison Chart, or our Shop and Compare tool, to see how it measures up to other options.

The brand has listed two different measurements for the Venus Cup’s capacity, one number measured “to the suction holes” and the other to the rim. Because the suction holes are fairly small it’s possible that most people will get the full listed capacity to the rim, but please keep both listings in mind when you’re deciding what cup to buy. Other higher capacity cups with the amounts measured to the holes are listed on our chart as well. Their website also includes many helpful assets.

On paper the cup looks pretty darn great. Unfortunately, neither cup was one that I would continue to use. The Small would always suction to my cervix during wear- this causes immediate discomfort bordering on pain. It’s not a fun sensation and both times I tried the Small it occurred, despite attempts to reposition. The Large was comfortable, I wasn’t able to feel the cup despite it being larger than most of the cups I like in the body. I did have trouble with small leaks both cycles and wasn’t able to really stop them on the heavier days. I wasn’t even close to overfilling, and despite all of my attempts at troubleshooting nothing seemed to work. This is a frustrating issue for me but it’s not the only cup I’ve experienced this with and won’t be the last.

Even though the cup wasn’t a good match for me it has received tons of great feedback from others who have already tried it. I always say that every cup is going to work for someone, you just have to find the right vagina+cup pairing.

For those who do have heavier periods and want a higher capacity cup, the Venus is a very viable option in both sizes, and their price is hard to beat. 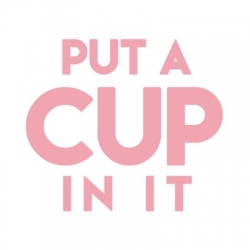 Latest posts by Put A Cup In It (see all)