How the Menstrual Cup Improved My Sex Life Before I have you thinking that I’m claiming my cup makes me hornier than a newly hormonal teenager, I’d like to clarify. The cup obviously didn’t boost my libido [far from it, especially since (until recently) I was in a marriage that made sex emotionally and mentally complicated] but what it did do was improve the overall feel due having more natural moisture and familiarity with my own body. This has translated to a more satisfying experience, both with and without a partner.

The Problem I Didn’t Know I Had

Lube. Everyone uses it, right? Like most couples, we used lubricant to avoid unwanted friction and general discomfort — though lubricants do have their own downfalls, but that’s for another post. Point is, I haven’t used lubricant since I began wearing a cup — with exception for toy play and extreme dehydration.

This was actually one of the first things I noticed after I began using a cup. Within a couple months of using one, I was well aware of how much tampons had been altering my vaginal environment. It was suddenly very clear that they had been causing dryness that extended well beyond my period. I was shocked to find out just how irritating tampons had been. It really was a problem that I didn’t even realize I needed to fix.

How Can Tampons Lead To Vaginal Dryness?

Well, tampons are designed to absorb. In fact, I recently read that 35% of the fluid absorbed by tampons is actually your body’s own natural moisture — not menstrual blood. Thirty-five percent. What!? The vagina has a system in place to take care of itself and keep everything in balance. Tampons actively fuck up that whole system, drying you out and altering the pH. The effects of tampons can take time for you body to correct — which is why I, like many, experienced dryness that extended beyond my period and tampon wear.

Additionally, most tampons are made with synthetic fibers that have not so vag friendly chemicals in them that can add to the already irritating nature of these moisture suckers. They can also cause micro-abrasions (tiny cuts) and leave fibers behind. All of this adds up to some serious hurdles for the delicate tissue in your vagina to deal with and heal from before being subjected to it all over again in less than a month.

Menstrual cups are most often made from medical grade silicone, though they can be made from TPE or rubber, all of which will only collect your menstrual fluid rather than absorb it (or anything else!). Because a menstrual cup is made from materials that don’t absorb or leave anything behind, they don’t alter the vaginal environment. Think of a menstrual cup sort of like no-trace camping; it leaves your vagina exactly how it found it. (You can quote this! 😂)

The moisture angle here is fairly straightforward, so I wanted to end on the, more personal and subjective, bodily awareness portion.

There is no denying that using a menstrual cup puts you into closer contact with your vagina. For some people this can be a big hurdle in even trying a cup, and for others it’s no big deal. For me, it definitely put me more in tune with my own body — and I was open to that. I can more readily tell if something doesn’t feel right physically or if my period is unusual in any way. Being more in tune with my body also helped me be more aware of what I needed to do, to improve the way sex felt for me — with my now ex-husband, or alone.

As of 2018, I am a happily unmarried and I also entered the dating scene. Nervous could not begin to explain my emotions going into this. More than a decade of marriage, spotted with infrequent sex that was often emotionally and mentally complicated had me unsure of everything. I was fully prepared for it be terrible forever — physically and emotionally.

My first kiss post separation was hilariously embarrassing. I might as well have been 15 again, because I clearly had no idea what I was doing. Think clanking teeth and a total lack of spatial awareness. It was…. something. Thankfully, sex was less awkward and more enjoyable with a partner that I felt more emotionally safe with — and with the help of a few drinks if I’m being honest. Not that I recommend that. Anywho… the point is that all of the familiarity that I have gained over these 11 years of using a menstrual cup still translated, even with a new partner. I was aware of what I was feeling, and where, and I was able to articulate what I needed because of that knowledge and familiarity.

Obviously the menstrual cup doesn’t get full credit for this second portion, but using a cup was definitely an effective way for me to learn more about my vagina, and vulva, than I ever knew I wanted to. And having more natural lubrication as a result of using a cup was a game changer for me. It feels different than synthetic lubricants and, for me, noticeable better. Though absolutely different strokes and all of that, there’s no judgement coming from me for whatever feels best for you. It’s all about being in tune with your body and knowing what you like — which is the whole point.

Sex WITH A Cup In It?

Okay, so I was going to end on that last note, but we get this asked all of the time and I want to cover it. Can you have sex with a menstrual cup in? Maybe! It’s not recommended by any brand but it may be possible depending on your cup, your vagina, the sex position, and the penis or toy. I find that a softer cup, with the stem removed, works well (in the 1-2 range of our menstrual cup firmness chart) and that any position from behind can cause a more noticeable cup feel for your partner. The vagina lengthens considerably when aroused, so it makes more room for a penis (whether or not one is involved). A cup will typically move up with the elongated vagina and if there is penetrative sex the penis or toy can often just go to the side of the cup. If you’re not into the idea of trying sex with a traditional cup, a menstrual disc is a great option that is most often recommended for use with penetrative sex. 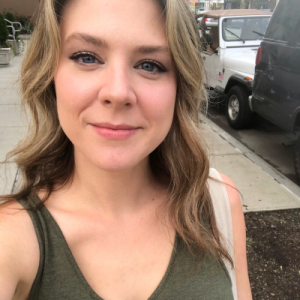