Before you can insert your menstrual cup, you need to know how to fold it. We’ve got you covered with the 9 most common folds, including the best for beginners!

1) Is easiest and fastest for you to fold and go

We’ve put together a little video to break down the folds that we think are the most user-friendly… and a couple that aren’t quite so much (the E Fold and S Fold), but do work for some.

For future use we’ve also broken the full video down into individual clips for an easy to reference playlist. Our menstrual cup folds playlist will walk you through each of the folds.

Punch Down Fold / Punchdown Fold (or Push Down)

Using your index finger, push down the rim of one side of the cup deep into the base of the cup. This creates the smallest insertion point, helps to pop open the cup, and is a great fold for beginners.

C Fold or U Fold

One of the most commonly seen folds in instruction manuals, this involves simply folding the cup in half so that the rim of the cup resembles the letter C or U. While this fold is very easy to do, for those who need  narrow or small insertion point, this fold is less than ideal.

Similar to the 7 fold, you will want to create a 7 shape with the rim of the cup, but instead of allowing keeping the 7 shape, the longer side of the 7 will be folded the opposite direction, creating sort of a tulip shape, which is where it gets it’s other moniker.

This is a fairly hard fold but I’ve heard it’s a game changer by some. For this fold, pinch the edge of the cup, and push the pinched portion of the cup into the cup, allowing the body  of the cup to fold up around the pinched portion. It’ll look a bit like labia with the bean sticking out. The protruding nub can be pushed up once inserted to help the cup pop open and create a seal.

Be sure to grip the cup well while inserting this fold as it does have a tendency to pop open – this also makes it a great fold for those who have trouble getting their cup to open.

Similar to the punchdown, push the rim of the cup down into the cup, but then fold over the side of the cup and twist it around the body of the cup to create not only a narrow point of insertion, but a narrower body as well.

For the diamond fold, instead of pressing the rim into the body of the cup, like the punchdown fold, pull the rim down on the outside of the cup and flatten the cup so that it somewhat resembles a diamond shape. To complete the double diamond, simply fold your diamond shape in half to make it narrower as a whole.

Tips for Inserting Your Menstrual Cup

If you’re still having trouble getting your menstrual cup to open and trying different fold techniques hasn’t helped we have a few quick tips.

Before using your cup, be sure to give it a rinse in the sink with warm water and a mild soap (if needed). Give your cup a flick to remove excess water, but don’t dry it off! The bit of leftover water can help make the cup easier/smoother to insert.

A bit of lubricant can make insertion easier, but it can also be slippery, so be sure to use only as much as needed and keep it on the rim! A cup with grip rings may be helpful.

Get in a comfortable position.

Tensing up will only make insertion harder. Some popular options are squatting, seated at the toilet, one leg up on the toilet or the edge of the tup, or even lying down (I know it sounds crazy, but some people swear by it!)

Moving the cup after inserting can help get it to open.

Know where your cervix is.

Last, but not least, knowing where your cervix is can help ensure that you place the cup in a way that ensures it will catch your flow. Most people won’t have an issue, but if your cervix is tipped or tilted, it is possible to accidentally push your cup to the side of the cervix, which will prevent the cup from collecting anything at all. If you have a low cervix, placing the cup with the rim around it is a tip that works for me and may help you, too.

If these tips don’t work and you’re feeling frustrated there is a small chance the cup isn’t the right size or firmness for you. But before you throw in the towel, check out our Menstrual Cup Quiz, if you haven’t already, and answer 9 questions that should point you to a great cup for you. We also recommend our incredible support community, as well as our Menstrual Cup Fit Tips video if you need additional help.

Tips to Help You Master Your Period Cup

Now that you’ve gotten the hang of your cup fold, check out these resources to help you get past the learning curve and straight to whatever the closest thing to period bliss is!

Have you found that trying a different fold has made all of the difference for you? Let us know what your favorite is!

PrevPrevious ArticleWhy A Menstrual Cup Might Make Your Job Easier
Next ArticleMenstrual Cup Dangers and Fears : Facts or Myths?Next 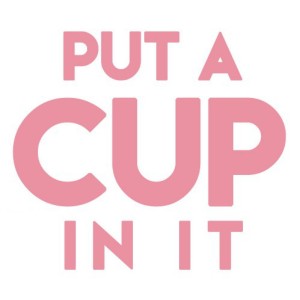